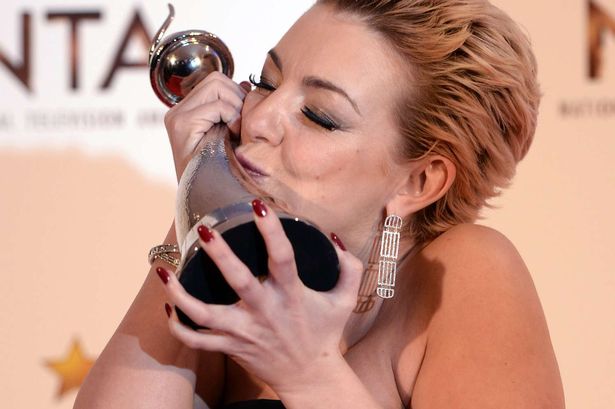 Cilla actress Sheridan Smith said she was in tears in the back of a taxi as she missed out on picking up her award at tonight’s National Television Awards.

The ECHO caught up with the star backstage when she finally arrived at London’s 02 Arena after getting stuck in traffic on her way to the ceremony.

Sheridan, who was awarded for portraying Liverpool legend Cilla Black in a three-part ITV drama, beat off stiff competition to win the best Drama Performance category.

She spoke of her love for the city as she thanked showbiz legend Cilla for allowing them to tell her story on screen – and asked the ECHO to thank Liverpool for voting.

The 33-year-old, who previously won a BAFTA for her role in Mrs Biggs, said: “I love Liverpool, when I was filming there everyone took me to their hearts and made me cups of tea. So thank you to anyone who voted for me in Liverpool.

“I can’t believe it. I’m so overwhelmed by it all. But I’m not going to cry. Scousers don’t cry!

“I will be visiting Liverpool as soon as I can because the place made me so welcome. It’s my favourite city in the world and always will be.”

She said she had not spoken to Cilla but said hopefully the former Blind Date host would be pleased.

Sheridan said: “It’s her story we told so it’s thanks to her that we’ve got it.”

Sheridan spoke to the ECHO after she went up onto the NTA stage at tonight’s bash.

The former Two Pints of Lager actress told the audience:

“I am so sorry. So embarrassing. Can you imagine, being stuck in the car for three hours. I’ve got nothing planned other than to say sorry.

“Thank you my Cilla team. I thought I stood no chance. Thank you to everyone who voted. I’m going to go before I cry or swear.”

She beat rivals Benedict Cumberbatch, who was nominated for his role in Sherlock, actress Sarah Lancashire, who got the nod for her role in Happy Valley, and Dame Maggie Smith for her performance in Downton Abbey.”