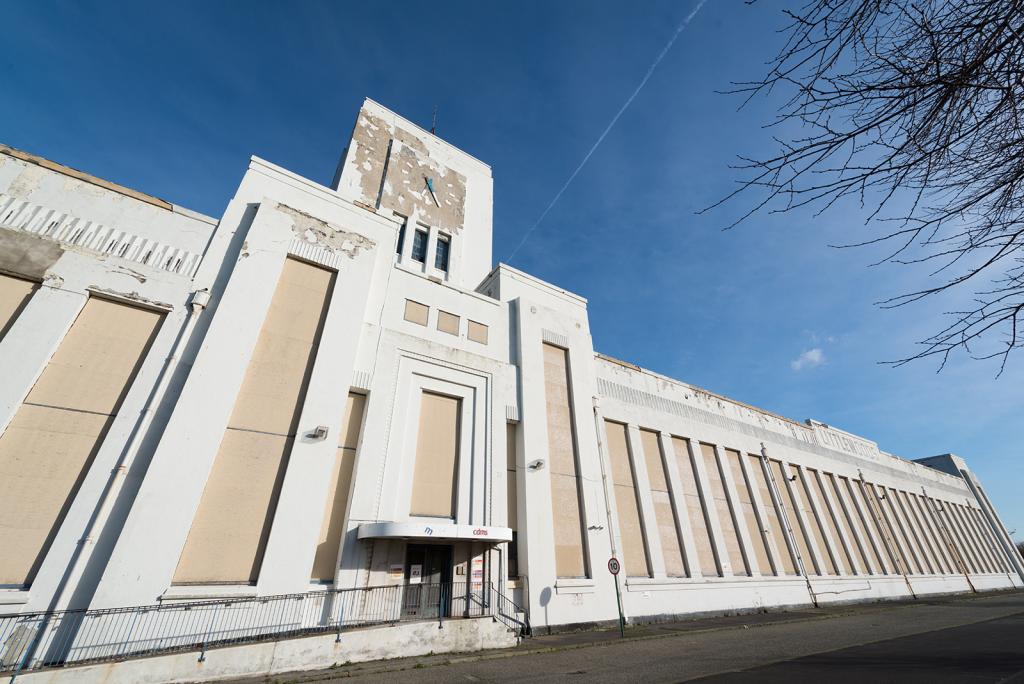 CAPITAL&CENTRIC has completed its acquisition of the
180,000 sq ft former Littlewoods building and an adjacent
six acre development site on Edge Lane in Liverpool,
having agreed a 250 year lease with Liverpool City
Council to deliver a major hub for film, television and
other creative industries, contributing to regeneration, job
creation and promoting further investment.
Sir John Moores, and his brother Cecil were the owners
of Littlewoods which was the country’s wealthiest family
owned business empire, covering department chain stores,
catalogue shopping, and football pools. The building
was constructed during 1938 in an art deco style, it was
used to used to process the betting slips from the Football
Pools. The buildings were occupied by 2,000 members of
staff, in the 1960’s a concrete hangar was added to join
the two buildings and create a 30,000 sq ft canteen for the
workers
The buildings further importance is highlighted by the
contribution made to the war effort when its vast internal
spaces were enlisted in the national interest during WWII.
At the outbreak of the war the building’s mighty printing
presses were used to print some 17 million National
Registration forms in just three days. The floors of Halifax
Bombers were assembled at the building as well as
barrage balloons. Its design was such that it became
the nerve centre of MC5, the government agency that
intercepted and censored mail to break enemy codes.
Bomb shelters in the basement areas of the building still
contain artwork and graffiti on the walls dating from the
1941 Wartime Blitz.
Tim Heatley of CAPITAL&CENTRIC comments: “This
acquisition marks an important milestone for us, it is the
result of more than five years hard work and the next step
in realising our vision for this high profile site. Liverpool
City Council and the Homes & Communities agency have
been very supportive of our plans for this iconic building,
which forms an important gateway to the city. We’re
excited at the opportunity to restore the Littlewoods
Buildings and give it an exciting new lease of life that will
put it on a national stage and finally give it the recognition
that it deserves.
Last year we completed the speculative redevelopment of
the neighbouring Bunker building, which is now fully let.
Bunker has successfully attracted a mix of media and tech
companies that will inspire the future of our Littlewoods
scheme and we can’t wait to get started.
Our vision for the site is to see it not just become the
heart of Liverpool’s vibrant film and media industry, but
a draw to companies in this sector both nationally and
internationally. We aren’t looking for companies interested
solely in co-location, but in collaboration, to be a part of a
hub that can fully capitalise on Liverpool’s world-class offer
as a filming location.
We are in the last throws of finalising the legal
agreements with the Liverpool City Region Combined
Authority for gap funding to secure the long-term future of
this iconic structure. We already have a significant amount
of occupier interest which is testament to the standing
of the building, given we haven’t yet commenced any
marketing activity.”
The next phase of development represents a £35m
investment from CAPITAL&CENTRIC, the project once
complete will create in excess of 350 new jobs.
Councillor Malcolm Kennedy, the Liverpool City Council
Cabinet Member for Regeneration commented, “We’re
delighted that CAPITAL&CENTRIC have now completed
the acquisition of the Littlewoods site. We are well aware
of their excellent track record in delivering innovative
buildings and I’m sure they will handle this vital piece of
regeneration with sensitivity and great imagination. The
digital and creative industries are a multi-billion pound
growth opportunity for the Liverpool City Region over the
next decade and this development represents a unique
opportunity to further accelerate this sector. The City
Council fully support the plans that CAPITAL&CENTRIC
have drawn up and look forward to working closely with
them as the scheme is delivered.”
Social impact developer CAPITAL&CENTRIC is wholly
owned by founders Tim Heatley and Adam Higgins. It is
developing more than £500m of property in Manchester
and Liverpool. It currently spends £2m a week on its
regeneration activity, which will rise to £3m a week by the
3rd quarter of 2017.
ENDS
CAPITAL&CENTRIC acquires
iconic Littlewoods Buildings.

About CAPITAL&CENTRIC
CAPITAL&CENTRIC is one of the North West’s most creative and active
developers. Co-founded by Tim Heatley and Adam Higgins, its focus is on
projects that create a positive social impact. It currently has £300m of property
under construction. It has completed over 500,000 sq ft of new developments in
the past three years. It still has no bank debt.
Since the recession it has developed more speculative projects in the North
West than any other developer.
It has a development pipeline of over £500m including KAMPUS a large mixeduse
scheme within Manchester City Centre, with recently completed projects
such as TEMPEST (Liverpool City Centre), BUNKER (Liverpool), FOUNDRY
(Salford) and LIGHTBOX (Wirral).
www.capitalandcentric.com / info@capitalandcentric.com
For further information, please contact:
Anna de la Perrelle – delapr
anna@delapr.com / 0787 652 8773