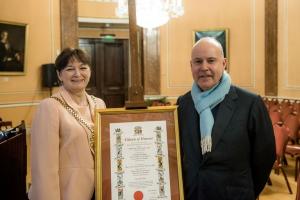 David Yates, the film director behind some of the UK’s highest grossing feature films, has become Liverpool’s latest Citizen of Honour in a special ceremony on Friday 17 February.

He was nominated to receive the accolade for his commitment to filming in and around the city, since he started his feature film career in the city in 1998, and more recently his instrumental influence on choosing Liverpool as the only location in the world for the latest JK Rowling phenomena Fantastic Beasts and Where to Find Them.

Lord Mayor of Liverpool, Councillor Roz Gladden, said: “Citizen of Honour is designed to give recognition to those who have made a positive difference to the city. David has reached the pinnacle of his profession and has made a huge contribution to raising the profile of Liverpool on the big screen, and it is right and proper that we formally recognise his achievements and contribution to our success as a film friendly city.”

Yates said: “It’s is a great honour to be recognised in this way by the city of Liverpool, and to join some of the remarkable and inspiring people who have been given this honour in the past.

“There is and has always has been a tremendous beating heart that for me defines Liverpool. It starts with the people – their energy, humour, kindness, and sheer indefatigable spirit makes you feel like anything is possible.

“Making films here has always been a joy because of it. And I’m touched and proud to be welcomed back once more as an honoury citizen – not many awards are able to bring you home in quite the same special way as one like this.”

Yates started making films at the early age of 14 with family and friends being drafted in as cast members on his short films using a camera his mother had given to him.

His first professional film, When I was a Girl made the festival circuit and helped with his acceptance into the National Film and Television School in Beaconsfield, where he studied under its directing programme.  With a career spanning both film and television disciplines, Yates believes that when it comes to film or TV, it’s all about storytelling and holding your audience.

As well as Yates’ long list of credentials along with his involvement in the final four Harry Potter Films, he has become one of the UK’s highest grossing film directors.

The Citizen of Honour title is the latest acknowledgement of Yates’ contribution to the UK and Liverpool’s Film Industry.  His previous accolades include:

The Citizen of Honour Awards were introduced in 2008 to formally recognise those individuals who have made a significant, exceptional or unique contribution to enriching the image of the city and/or its citizens. To date there are 27 Citizens of Honour including Bill Shankly, Liverpool World War Two veterans, April Ashley, Dr David France and Lewis Biggs.