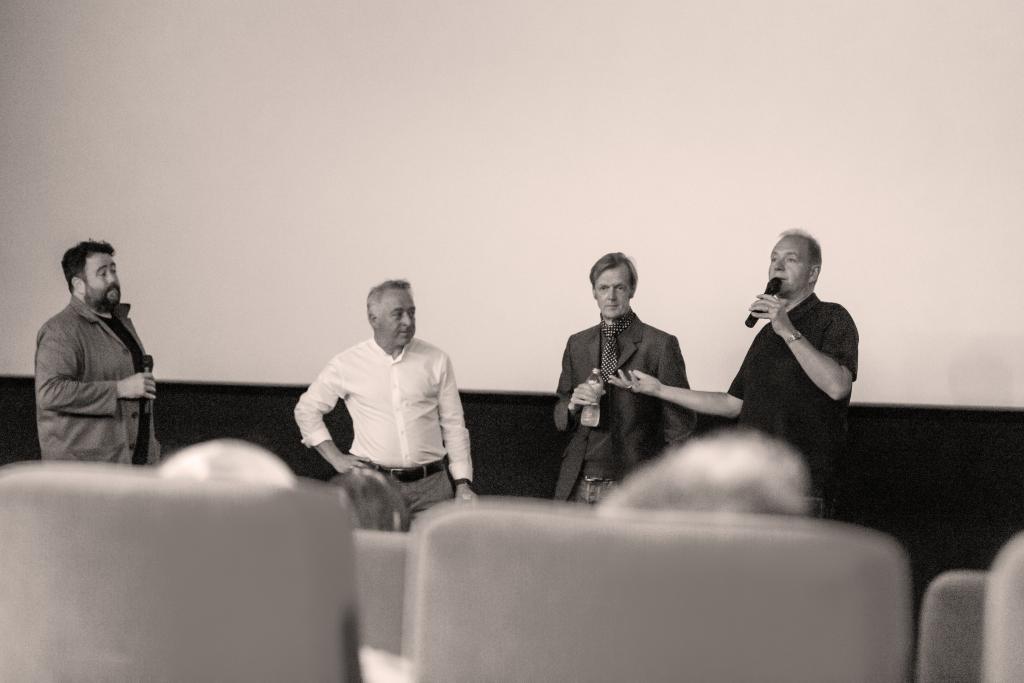 Featured Photo thanks to Dan Bentley.

We visited The Light Cinema in New Brighton on for a special screening of Sometimes Always Never, followed by a live Q&A with the Liverpool ensemble of filmmakers; Writer, Frank Cottrell-Boyce, Director, Carl Hunter, and Producer, Roy Boulter (Hurricane Films) – hosted by actor, Celyn Jones.

The film follows Alan (played by Bill Nighy), a stylish tailor with moves as sharp as his suits. He has spent years searching tirelessly for his missing son, Michael, who stormed out over a game of Scrabble. With a body to identify and his family torn apart, Alan must repair the relationship with his youngest son Peter (played by Sam Riley) and solve the mystery of an online player who he thinks could be Michael, so he can finally move on and reunite his family. 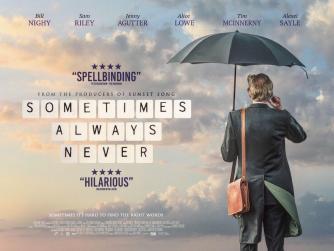 Q: How did this project come about?

It actually started with a short story called “Triple Word Score,” that was published in The Reader magazine, which Carl really liked.

I read the short story Frank had written, and we were talking the possibilities of making it into a film – and like most films, you get close to making something and it falls at the last hurdle. One day, Roy asked me “I have a company that makes films – why don’t we make yours & Frank’s film?” And here we are.

Frank and Carl first discussed Sometimes Always Never after finishing their last film, Grow Your Own, a BBC production. Alongside ‘Grow Your Own’ and ‘Sometimes Always Never’, Frank and Carl have also worked together on an award winning children’s novel ‘The Unforgotten Coat’ and two short films, both produced by Hurricane Films: A Winter’s Tale (commissioned by the British Council) and A Day In The Life (winner of the 2016 Labour Film Festival Short Film).

Being a producer, it’s all the hard stuff and not the beautiful words and beautiful pictures. We are about the hard earned money, and the hard to find money. Me and Carl have known each other for decades, we obviously love Franks’s work so for us it was a no-brainer.

We approached Bill, and he loved it straight away, but after that it took another 3 years. You have Bill Nighy, this script and people still wouldn’t trust a first time director, thankfully now he’s a second time director and the next one will be really quick (hopefully).

Q: Where did the idea for the story come from?

When we started looking at it as a film, I was living in France (2007). I’ve watched loads of films by Étienne Chatiliez, who was from Lille, where I lived – and all his films were about monstrous old people with terrible tempers, and did terrible things. I thought of that kind of character like an old person, really bad temper ridden – He made one called Tatie Danielle – and it’s like a special effect, it’s something older actors would be really happy to have a part in, and once Bill was cast, he took it to a whole new level.

Q – The film comes from a specific point of view i.e. the design & shots  – can you tell us about your vision of that?

The vision is very deliberate. My background is design, my MA is in design, so I come from a very visual & photographic background, so I am used to pictures – in fact where I am most comfortable than anything is with crayons.

Director Carl’s Art School background heavily influenced the look of the film, with inspirations coming from Czech and Russian filmmakers. It is an intentionally stylized and authored film.

“I’m greatly influenced by European Cinema with especially by the likes of Aki Kaurismäki, and Milos Forman and also by the work of American Wes Anderson. I sat with Director of Photography, Richard Stoddard and went through a large pile of DVDs together to arrive at the palette we were after.

When I make something I keep a scrapbook. I carried it on set and our Production Designer, Tim Dickel, had copies of every single page – so he was aware of a kind of vision for the film.

I forced them (Richard & Tim) to come to an exhibition with me, which was by an American photographer called Gregory Crewdson and it dawned on me that we’ve got the same language now. Because I had forced them to spend some time in this visual world. It worked a treat!

I knew that Bill was anxious about a low budget British film and what that would mean – but he pointed to one of Carl’s own photos in his scrapbook and said “I want to be in this movie.”
That was such a huge thing to get someone to make that kind of statement, as opposed to “have my people call your people and we will talk about this in the far distant future.” That’s what’s been so lovely about making this film – it was made by people who are very open to each other, it was made with solid friendship.

Q – Is it true that Bill Nighy has always wanted to play someone from Liverpool?

Bill said “I spent my happiest years in Liverpool at the Everyman Theatre, and I’ve always told myself I couldn’t do a Liverpool accent, but actually I think I can.” We’re always nervous about people doing Liverpool accents, because 2nd to Scottish it’s probably the most abused accent in film – but we’d seen Pride, with a superb performance where he’s got a brilliant Welsh accent.

Bill’s character isn’t from Liverpool, he’s from the outskirts, in Lancashire – he worked really hard on it. He wasn’t demanding at all and it was a joy for him to do, he just walked round with his Scouse accent all the time.

Q – Were the 70s interiors and mobile phones a deliberate, mysterious setting that you picked?

It is very clearly a contemporary story, but the look of the film makes you feel like you are watching something from the past. The idea that visually, what I was trying to do with the characters was have them locked in the past through grief. The film looks like it is dated, it isn’t – but you’re meant to feel like ‘why is this family stuck in the past, but actually we’re in the present?’

That’s why in the car, when they can’t move – we see the car travelling. We shoot that using a low-loader, we shoot that by putting the car on like a trolley, and then film it and it will look real, or you put it against a green screen and that will look real, or you can do it with 1960s back projections, which doesn’t look real, but again I was desperate to do that. I wanted this sense that even when they were travelling – they were locked in the past. And also I am a huge fan of The Saint.

Q – Following on from the interiors – could you tell us about the exterior locations e.g. Boyce B&B and the Morgue

Economics. We shot the film in Yorkshire as part of the funding was there, there was a studio there on the outskirts of Goole (majority of exteriors shot here). As well as shooting exteriors in Crosby & that area. We looked at locations in Yorkshire but we thought we had to shoot in Merseyside, Me & Sol (Papadopolous), hadn’t made a film in Liverpool in 10 years, so we wanted to spend some time at home – so we did a week in sunny Crosby!

Filming of Sometimes Always Never began in October 2017 on Merseyside, with location filming taking place in Maghull, Crosby and Ainsdale. After a week on Merseyside, the production moved to Yorkshire, where filming on set took place over 6 weeks.

Q – What is the relevance of the title? 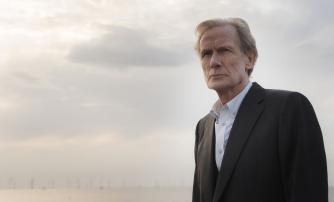 Bill is a very well dressed and a very stylish gentleman. The text messages I used to send him, I would send quite a long text about subtext or any thoughts he might have of a particular scene, and on the bottom I would say “Carl’s got new shoes.” And the reply would just be “Photograph please,” and I’d send a photo – and he would just reply “sensational,” and nothing about the scene.

Unless I mentioned something about clothing in a text, there’d be no response at all.

Q – Was Alan’s profession always as a tailor? Or is this something that Bill brought to the character?

The film was tailored to Bill, it was like a fitting. Alan was in IT originally. We had the basic suit, so the suit was part of it, and then Marmite, because his other obsession in life is with Marmite.

Q – There are scenes with animation in the film. Why did you choose this style of animation feature?

I love animation.  I don’t think animation is used enough in film, I know Wes Anderson uses it, but it’s not in British cinema. It is a nod to a particular era of animation, which I was hoping would resonate with my age group.

This level of filmmaking is the mother of invention. Because ‘Scrobble’ the ‘blag Scrabble’ came about because we didn’t think we’d be able to afford the real Scrabble. It took us 5 years of negotiation with Hasbro to get permission. So in between, Frank came up with Scrobble. In the end we were able to use Scrabble, but with the conditions; no close ups, limited use, and we can’t call the film Triple Word Score. Filmmaking like this, it is necessity a lot of the times. From necessity, comes great moments like that.

Q – What’s the significance of having so many scenes shot from behind frosted glass?

The scenes behind frosted glass in the Morgue & Bus Stop comes to my love of photography. I am a huge fan of a New York-based photographer called, Saul Leiter, and he came up with this style of photography, where he would sit in Manhattan bars and photograph on cold days through a window with a lots of condensation/ice/steam – he’d take stunning photographs that could be paintings. Again with film/cinema, I love the idea of referencing art, but the wonderful thing about the frosted element – although I’m suggesting ‘here is a picture,’ what I prefer is you make up your own mind about the picture. Because it is frosted and fuzzy, you only can see what you choose to see.

Sometimes Always Never debuted at the BFI London Film Festival in 2018, and is in cinemas now. Find times at The Light Cinema, New Brighton here.