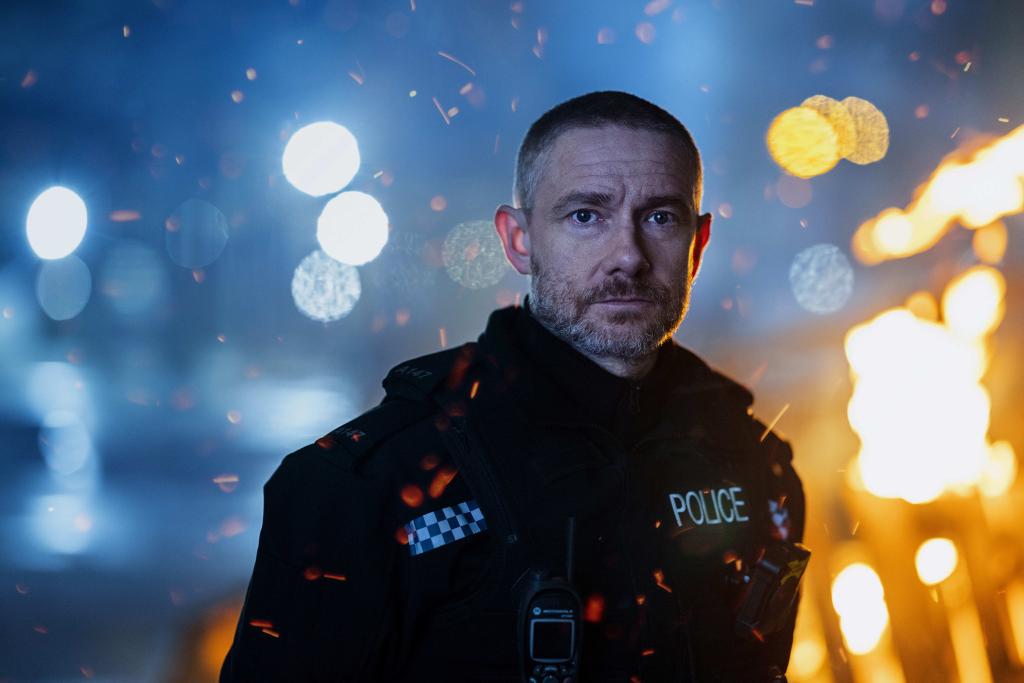 The first image from original new BBC drama The Responder, one of the latest Liverpool productions to secure funding and support from the Liverpool Film Office through the LCR Production Fund, written by ex-police officer Tony Schumacher and made by Dancing Ledge Productions (The Salisbury Poisonings), has been released.

It features Martin Freeman (The Hobbit; Sherlock; Breeders; Fargo) in character as Chris, a crisis-stricken, morally compromised, unconventional urgent response officer tackling a series of night shifts on the beat in Liverpool.

Whilst trying to keep his head above water both personally and professionally, Chris is forced to take on a new rookie partner Rachel (Adelayo Adedayo). Both soon discover that survival in this high pressure, relentless, night-time world will depend on them either helping or destroying each other.

The Responder holds a mirror up to the emotional extremes of life on the front line of British policing – sometimes darkly funny, sometimes painfully tragic, always challenging.

Martin Freeman said: “Tony Schumacher’s scripts were so unique and honest that I knew very quickly that I wanted to be a part of The Responder and take on the role of Chris. No-one writes like Tony and it has been exhilarating inhabiting the world he has created.”

Tony Schumacher said: “My fantasy casting when I was writing the character of Chris in the Responder was Martin Freeman. Seeing that fantasy become reality is beyond exciting. Martin is one of the great British actors. He brings such a well of talent and humanity that breathes magic into the words I’ve been lucky enough to give him. I can’t wait for audiences to get to see his performance in this role, it’s one I feel very lucky to have had a front row seat for.”

The Responder has secured funding and support from the Liverpool Film Office through the LCR Production Fund.

Filming is taking place now in and around Liverpool City Region.