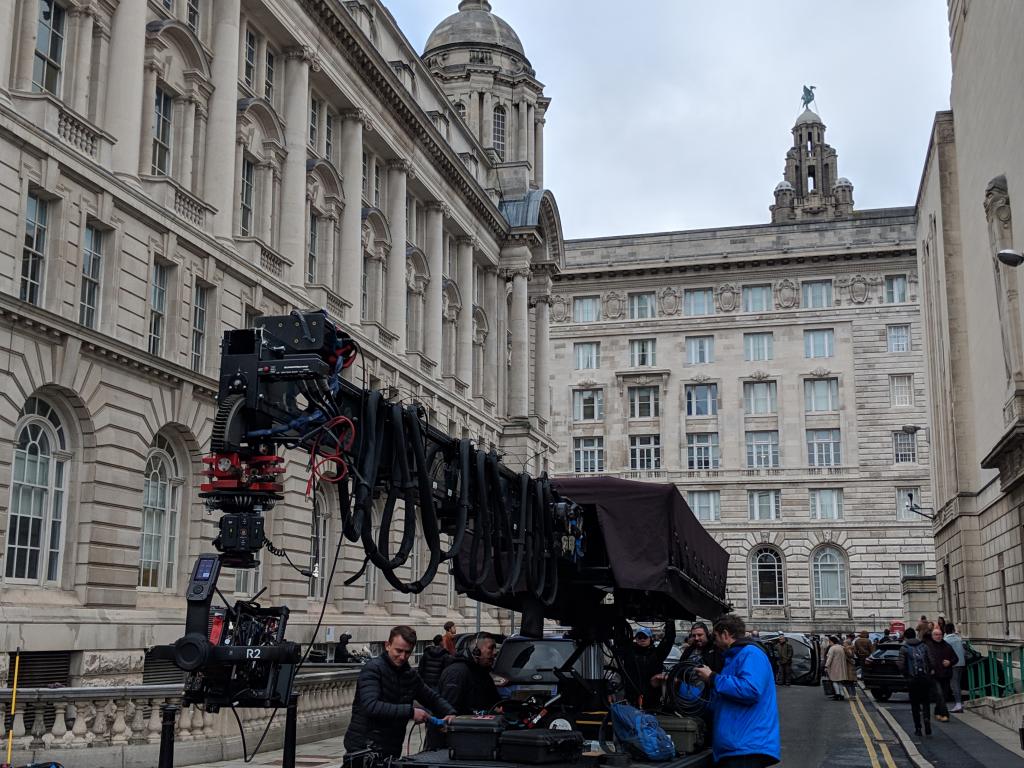 2019 a record breaking year for filming in Liverpool City Region

Liverpool Film Office has broken all records for the fourth consecutive year as it celebrates its 30th anniversary.

Latest figures show that, once again, it has been a bumper year for filming across the Liverpool City Region, with 324 different film and TV projects filming here, racking up an impressive 1,750 production days – 363 more days than 2018.

There has been an increasing trend in the number of high-end TV dramas coming to the city, so thanks to the likes of Sky Atlantic’s Tin Star, Netflix’s The Crown and The English Game, and BBC productions World on Fire and Years and Years, the region has seen a 12 per cent climb – the most filmed here since records began.

Other productions filmed in the region in 2019 include Amazon Prime’s The Feed, Sky One’s COBRA, Netflix’s Irregulars and BBC One’s Moving On. As a result, Merseyside has been a temporary home to stars including Tim Roth, Ian Hart, Robert Carlyle, Russell Tovey and Genevieve O’Reilly.

Liverpool has also once again been a double for locations across the world, including New York in Das Boot, Madrid in Years and Years, London for Irregulars and Wales in The Snow Spider.

Latest figures also show local productions are also on the up, by an impressive 26 per cent.

This year saw the creation of the Liverpool City Region Production Fund – the first local authority supported fund of its kind in the UK for more than six years – which will attract more productions to the region, create jobs and boost the local economy. To date, more than 48 expressions of interest have been received, with CBBC’s The Snow Spider being the first to receive support from the fund.

Announcements around further projects which will receive funding will be announced in 2020.

“What a way to celebrate our 30th anniversary with yet another record-breaking year!

“It has been an incredibly busy 2019 for the Film Office team – enquiries have increased tenfold and production levels across the entire Liverpool City Region are booming.

“Interestingly, there has been a very small drop in the number of productions coming to Liverpool – 22 fewer than last year – however, we are attracting an increasing number of high-end dramas which spend more time filming here, which is not only an invaluable economic boost but also benefits us reputationally within the industry.

“Looking ahead to 2020, we want to focus on developing and championing local production talent an create opportunities for them when productions head to the region.

“There are already some big projects in the pipeline so it looks like 2020 is going to be an action packed year for the Film Office.”

“Filming in Liverpool has been a fantastic experience, the location has been pivotal for our characters who return to face their troubled past in an all-new and surprising environment for the viewer.

Liverpool City Region provided us with a wealth of cinematic locations, and the support we received from Liverpool Film Office and the people of this city has been instrumental in creating our explosive third series.”

“This has been a year of unprecedented success for the film office and I’d like to congratulate the small team who go above and beyond to attract directors and production companies to the city region.

“Their work, alongside the enviable locations on offer and the film friendliness attitude, makes the five Merseyside boroughs an attractive place to film and keeps directors returning time and time again.

“We can safely say Liverpool is maintaining its crown as one of the most filmed cities outside of London.”